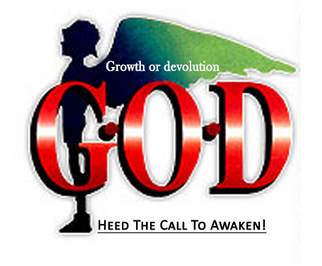 Growth or Devolution: Mezameyo to Yobu Koe ga Kikoe (English: G.O.D.: Heed the Call to Awaken, or just G.O.D. for short) is an RPG developed by Infinity for the Super Nintendo Entertainment System and published by Imagineer in 1996.

In the year 1999, a ten-year-old boy named Gen, fresh out of school for the summer and bicycling across Japan to visit family, witnesses an Alien Invasion that promptly wrecks human civilization.

Ten years later, Gen is a recovering amnesic working for Bless, an international alliance of humans fighting against alien control of Earth following the collapse of most world governments. Over the course of his fight against the alien menace, he'll go on a World Tour across many countries and landmarks, gather together a small Ragtag Bunch of Misfits, and learn the truth about his own Psychic Powers, the motives of the aliens, and the nature of the very Earth itself.

In terms of gameplay, G.O.D. is a fairly standard SNES-era JRPG, Random Encounters and all. Battles take place in an over-the-shoulder perspective, and each playable character has a set list of Psychic Powers which they learn as they level up and a Job System in the form of "Chakra". G.O.D.'s most notable twist on the formula is its setting - not just a modern-day sci-fi story in a time when fantasy settings dominated the RPG landscape, but one set on the real Earth itself, featuring all manner of famous landmarks and National Stereotypes.

A remake named G.O.D. Pure: Growth or Devolution was made for the Playstation. Little information is available in English.

Ironically for a game about world travel, neither G.O.D. nor G.O.D. Pure was released outside Japan. A Fan Translation patch for G.O.D. was released in 2018 by Dynamic Designs. All information regarding character names, dialogue, etc. on this page comes from this translation unless noted otherwise.

G.O.D.: Heed the Call to Awaken contains examples of: