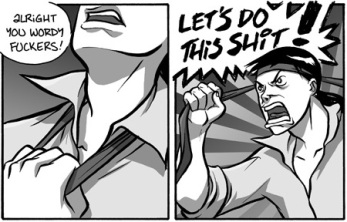 Exactly What It Says on the Tin: someone wearing a necktie around the head as an improvised Martial Arts Headband.

A trope often associated with salarymen and other corporate types whose business clothes come with a necktie. Sometimes they get overenthusiastic during an after-work party, or they get involved in Serious Business that justifies dropping the Dress Code.

In real life, most specifically in the hard drinking context, this custom comes from a drunken guy's ostensibly failed attempt to take off his necktie, which remains wrapped around his head for the rest of the party after they forget the matter or quit trying due to alcohol-numb fingers.