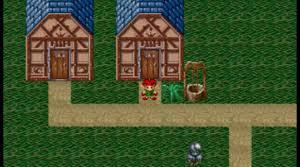 An obscure RPG for the PSX, Gobli's Adventure was a sample game accessible from RPG Maker. As such, few people have ever heard of it and information on it is scarce.

This is unfortunate, because as opposed to some of the more generic and basic sample games in many Game Maker programs, this one has surprisingly strong characters and a unique concept. You control Gobli, a goblin in a generic fantasy RPG who is fated to continually lose to adventurers to give them experience and money. Malcontent with his life as a Mook, he dreams of becoming a Boss and having a chance of beating the adventurers.

Gobli gets his chance when he gets a call from the programmer, saying he must go out and replace some of the slimes who are sick in the upper world. He ventures out; and along the way runs into a sprite whose only purpose is being a human-shaped hole in the wall, who decides to join him so he may gain a movement range. Once the slimes are taken care of, they venture out to change their purposes. Along the way they meet the cat Neko, a semi-rival to Gobli who also dreams of becoming a boss.