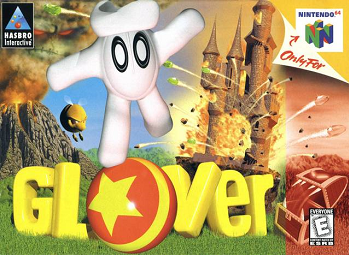 Once upon a time, a wizard ruled over a peaceful land. He spent his time cooking up potions atop his tower with the aid of his magical gloves, until one day, he mixed up the wrong ingredients and caused the brew to blow up in his face. This caused him to become encased in stone and fall backwards through the floor, while each of his gloves flew off in individual directions. One of the gloves flew out the window and lands outside, and here we have The Hero, Glover. Unfortunately, the other glove ended up falling into the cauldron, and emerged from it a sickly green color with red eyes, becoming the Big Bad, Cross-Stitch.

At the same time, the Crystal Balls that rested atop the spires of the tower flew from their positions. Glover freaked upon seeing this, and prevented them all from shattering by utilizing his magic power to turn all of them into rubber balls. They each bounced into warps surrounding the castle that led to various, malevolent locations. Now it's up to our animated handwear to retrieve the crystals, defeat Cross-Stitch, bring the wizard back to life, and restore peace to the land.

Developed by Interactive Studios (later renamed Blitz Games) and released for the Nintendo 64 and PC in late 1998, it also had another version that was released for the PlayStation in 1999, but unfortunately it turned out to be a Porting Disaster. The game had very mixed reviews citing a horrible camera (even for its time), bad level designs, and lackluster controls. It's a quirky platformer that requires actually using the Macguffins to solve puzzles and work contraptions. It also tended to be one huge Escort Mission, as if the Crystal Ball breaks or pops in any shape or form, you lose a life. A modern re-release for Windows was released on April 20, 2022.

On that note, a sequel

was planned to be released in 2000, but never got past the development stages. See the prototype here.