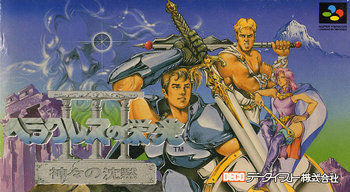 The third game in the Heracles no Eikou (Glory of Heracles) series, a JRPG series based on Greek mythology. Subtitled Silence of the Gods, it is considered to be the best of the series, receiving a smartphone re-release in 2008. Like almost all of the games in the series, it was never released outside of Japan, though a fan translation for the Super Famicom game exists.

The story begins with a young man who awakens in a village, unable to remember his past. When a hole in the earth to the Underworld opens, the man falls in to his death… except he survives without a scratch, revealing that he is an immortal. After seeing a strange place in his dreams, the man sets forth on a journey, uniting with other amnesiac immortals and fighting the monsters emerging from the Underworld in a quest to rediscover their memories and the meaning of their shared dream. Meanwhile, as monsters plague the earth, the people of the world wonder why the gods have turned their back on humanity…

Glory of Heracles III is one of the first games to involve immortals with lost memories. It is also notable for its considerable amount of Foreshadowing compared to similar JRPGs of the era and for doing a certain major twist long before it was made famous by a different RPG.