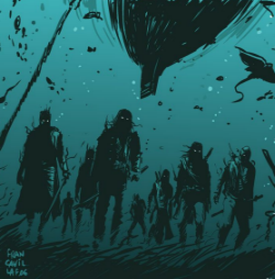 It's better down where it's wetter.
Captain Jack: All hands to the boats! [sees Barbossa glaring at him, steps back] Apologies. You give the orders.
Captain Barbossa: Gents! Take a walk!
Captain Jack: ...not to the boats?
— Pirates of the Caribbean: The Curse of the Black Pearl
Advertisement:

A character is too dense to have any buoyancy, so they deal with bodies of water by walking across the bottom rather than swimming. This is a common strategy with characters who can breathe underwater, or creatures like zombies, golems, or robots who don't need to breathe at all. Of course, immunity to drowning isn't strictly necessary to walk underwater, but it helps. As does superhuman ability to withstand pressure, if this is done in any but the most shallow waters.

Often happens in video games, where this saves the programmers from having to code for swimming behavior, while averting Super Drowning Skills. Just make the character move slower and jump higher, give them an Oxygen Meter, and voila! underwater physics.

If this is done by Fish People who should be capable of swimming, for no reason other than ignorance of the third dimension, see Water Is Air. See Walk on Water for an even more impressive version.