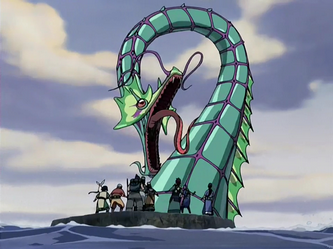 The Serpent makes its presence known.
"I thought I was trying to be strong, but really I was just running away from my feelings."
Advertisement:

Still reeling from the loss of Appa (although Aang insists he's fine), the gang realizes that they will need to take a ferry to get to Ba Sing Se instead of just flying. However, a young couple, one of whom is pregnant, has their passports stolen, so is not allowed on the ferry. Our heroes promise to help them across the treacherous "Serpent's Pass"; they're also joined by Suki, who's been helping with the war effort. Zuko and Iroh, who do take the ferry, meet another familiar face in the form of Jet and the Freedom Fighters; together they help 'liberate' some food.