Literature / Demons of the Deep 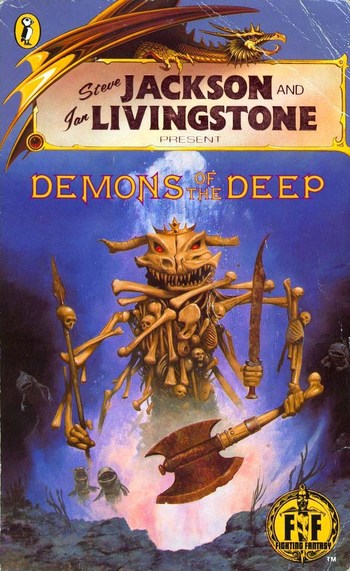 You were a sailor on the Sunfish, a ship departing from Port Blacksand to the south, before it ran afoul of the Troll and its wicked captain, the ruthless Bloodaxe. Despite your bravery, you were caught alive, but the pirates decided to have mock mercy on you: Bloodaxe gives you back your sword, provisons and rucksack, before tossing you to sea from the ship to die. However, in a one-in-a-lifetime strike of good luck, you sink above a magic circle inscribed in some underwater ruins, which allows you to breathe and move freely underwater for a whole day, as long as you don't emerge. With this new power at your disposal, you can explore the surroundings through remote caves, ruins, underwater civilizations and sunken ships, looking for a way to return home and avenge yourself.

While the rules are pretty much the same as usual, this book is set apart for the highly unusual underwater setting and a large variety of paths to victory, which can results in many, non-lethal endings, some less satisfactory than others, and a certain freedom when it comes to exploration compared to usual.

Demons of the Deep provides examples of: