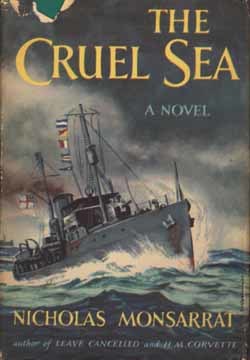 in the Royal Navy in World War II, written by Nicholas Monsarrat.

Sub-Lieutenants, Lockhart and Ferraby, although the novel portrays point of view of a number of other crew members, including Commander Ericson, Lieutenant Morell, Chief Engine Room Artificer Watts and Petty Officer Tallow. The crew of the corvette HMS Compass Rose are subjected to all of the discomfort, boredom, and occasional horror of the Battle of the Atlantic. The plot comes to a head when Compass Rose is torpedoed by a German U-boat, and the survivors are reassigned to the River-class frigate

Saltash. They survive the war having sunk a single U-Boat in five years of nearly continuous combat.

The novel was adapted into an Ealing Studios film in 1953, starring Jack Hawkins and Donald Sinden.