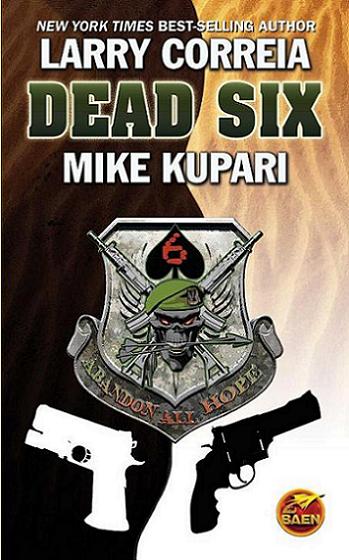 Dead Six is a Military Fiction novel co-written by Larry Correia and Mike Kupari published in 2011. The world is currently a hellhole with corrupt governments and secret organizations running it. Veteran and mercenary Michael Valentine is recruited by a secret government organization to conduct a terror operation in the small nation of Zubara in the Persian Gulf. Meanwhile, a thief and assassin known as Lorenzo is blackmailed by a vicious crime lord who wants him to commit an impossible heist. Their goals bring chaos and terror to Zubara, while Valentine and Lorenzo soon come into conflict with each other. Both men will kill anyone in their way to complete their objectives, but secrets and hidden conspiracies lie everywhere. Follow up by Sword of Exodus and Alliance of Shadows.