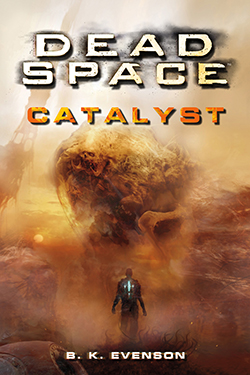 Dead Space: Catalyst is a Tie-In Novel set in the Dead Space universe, written by B.K. Evenson. Although it takes place before the first Dead Space game, it has no major connection to any other story in the series or Dead Space: Martyr, Evenson's other Dead Space novel.

Istvan Sato has always had mental problems, like hearing voices, seeing patterns everywhere, zoning in and out of reality, and a mild case of Lack of Empathy. The only person he will listen to is his younger brother Jensi, who has taken care of his brother since they were kids. One day, Istvan kills a local politician (though he says he was told the gun would shoot red dye) and is sent to a prison colony on the planet Aspera for political prisoners.

Coincidentally, Aspera is also home to a secret research facility that is building a Marker, led by fervent Unitologist Dr. Enoch Briden. As is customary with Markers, it's presence is causing people to hallucinate, mutilate, and kill themselves. Dr. Briden and his team discover that Istvan is not affected by the Marker's presence.

Jensi meanwhile gets a tip from his friend Henry Wandrei, a supervisor at the prison, of his brother's location. Jensi travels to Aspera as Necromorphs start to break out.