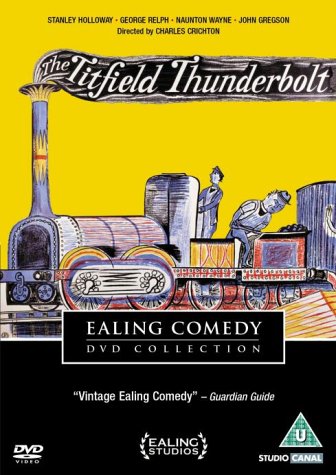 A 1953 comedy film produced by Ealing Studios and directed by Charles Crichton, set on a fictional British branch line between Titfield and Mallingford which has been condemned for closure by British Railways.

Sam Weech (George Relph), the village vicar, and Squire Gordon Chesterford (John Greyson), the grandson of the founder of the branch line, decide to buy the branch line and operate it themselves, with the help of a sizable donation from Walter Valentine (Stanley Holloway), a wealthy regular at the local pub.

This plan is bitterly opposed by the local bus company, Pearce and Crump, who were looking forward to a monopoly with the closure of the railway and call those wanting to run the railway "amateurs". They are also viewed with some trepidation by George Blakeworth (Naunton Wayne), the town clerk.

After an inquiry where both sides put forward their arguments for and against the railway being run by the amateurs, those wishing to run the railway are granted month's trial period before a railway inspector comes to decide if they can sufficiently operate a railway service.

Despite the bus company's attempts at sabotaging the railway's work, including blocking a crossing with a lorry full of bricks and shooting holes in the water tower, the railway becomes a huge success. The bus company then offers a merger between them and the railway, which is outright refused. So, on the eve before the inspection, the bus company derail the branch line's only engine and carriage and the town clerk is mistakenly arrested for derailing the train after trying to stop it before it crashed.

Meanwhile, Valentine and Taylor get drunk and take a pump trolley to Mallingford to steal another engine for the railway. This plan goes awry when they drive the engine through the town, across a park, and into a tree, resulting in their arrest.

After discovering their misfortune, Weech figures out where they can get an engine from for the inspection and rushes to the police station to release the town clerk. As they are wheeling the old engine out of the museum Weech realises that they haven't got a carriage, to which the clerk says that Taylor can help them. So they they take Taylor's home, an old railway carriage, and mount it on a flat wagon.

The next morning, the Inspector arrives to see the ensemble the railway has put on, but not before Ollie Matthews (Godfrey Tearle),the Bishop of Welchester — a fellow railway enthusiast and an old friend of Weech's — shows up for a visit and is drafted in as fireman. They are told by the local handyman that he's had to use rope to connect the engine to the flatbed because of the incompatible couplings between the two. Because the engine only has a weak handbrake, if they stop the train suddenly using the brakevan's stronger brake, the weight of the whole train would be put on the rope connecting the flatbed to the tender.

The lorry taking Taylor and Valentine to prison crashes with the bus from the rival bus company, the owners of which assume they've been rumbled causing one of them to admit their crimes.

Back at the station the train starts to leave, but is stopped and commandeered by the police to take them to Mallingford with the prisoners, now consisting of Valentine, Taylor and the two bus company owners. The train then continues until the inspector decides to test the emergency brake and the rope snaps, leaving the carriage and brakevan at a standstill and the engine continuing onwards. With the inspector none the wiser, Chesterford ropes in several locals to help push the stranded train down the hill to catch up with the engine which had come to a halt by the now repaired water tower. On the way they borrow a set of chains from the steamroller they jousted with, to replace the rope.

Once the train is recoupled to the engine they set off again, feeling there is now no hope of them making it on time after all the delays. They arrive at Mallingford ten minutes late and fear all is lost. The inspector informs them that actually, they only just passed (and almost failed because their average speed was almost over the limit). The villagers celebrate and the other drivers at the station blow their engines' whistles in celebration of their success.

The story is based on the preservation efforts of a group of people that went on to save the Talyllyn Railway, which could be classified as a Cool Railway, entirely worked, preserved, and funded by volunteers and indeed the first preserved railway in Britain.