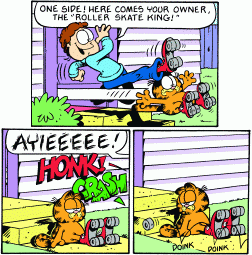 "Wheels on fire, rolling down the road..."
— "This Wheel's on Fire", The Band
Advertisement:

When a car is wrecked (or explodes), often a lone wheel will be seen rolling (or flying) away from the vehicle. Since Every Car Is a Pinto, it may well be on fire. This is pretty much only used comically.

Also often seen after an Offscreen Crash, rolling into view from Behind the Black and gradually wobbling to a halt.

The vehicular equivalent of Smoldering Shoes.

In a more minor version, expect to see a stray hubcap or two during chase scenes.

Truth in Television, and real Free Wheels can be quite dangerous. They're heavier than they look, especially truck wheels, and can go a long way without losing much momentum.

Not to be confused with Freewheelers, which was a 70s British kids' drama series.