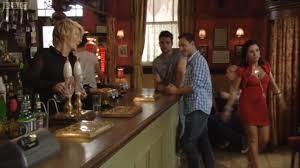 Boaby: What would ye like?
Victor: We would like it tae be warmer in here.
Jack: And for the decor tae be a little mair invitin.
Victor: And for you to be an eighteen-year old bird wi' big tits.
Jack: We would like tae come in here and no want tae kill 'wirselves.
Boaby: Tae drink?
— Jack, Victor, and Boaby the Barman, in the Clansman, Still Game
Advertisement:

Public houses, or "pubs" are a cherished British and Irish institution, and are rather different from North American bars (or, at least, the TV versions of said bars). They're much better lit, more comfortable, better furnished, and serve "pub grub" as well as the usual mixed drinks and pints of ale. They're open to all ages until a certain hour, and they close much earlier. You only have to be eighteen to have alcoholnote Sixteen in the UK if ordered with a meal and a legal adult present. Service generally requires going up to the bar to order. The closest American equivalent is the Local Hangout.

The local pub (or "local") is frequently the glue that knits together a community or neighbourhood, and is an obvious focal point for the cast of many British Series.