Literature / A Dance to the Music of Time 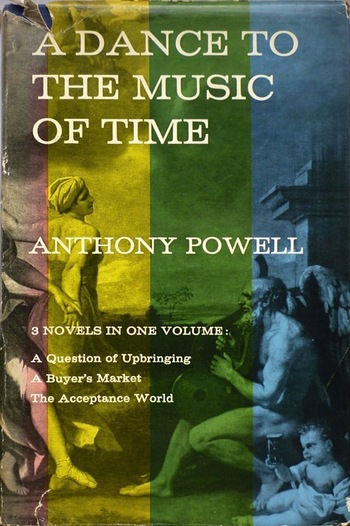 A Dance to the Music of Time is a twelve-volume cycle of novels by Anthony Powell, inspired by the painting of the same name by Nicolas Poussin. One of the longest works of fiction in literature, it was published between 1951 and 1975 to critical acclaim. The story is an often comic examination of movements and manners, power and passivity in English political, cultural and military life in the mid 20th century.

The sequence is narrated by Nick Jenkins in the form of his reminiscences. Over the course of the following volumes, he recalls the people he met over the previous half a century. Little is told of Jenkins' personal life beyond his encounters with the great and the bad, with events, such as his wife's miscarriage, only being related in conversation with the principal characters. Nick mainly functions as a cipher, reporting on the actions of the other characters, specifically the inscrutable Kenneth Widmerpool who is arguably the protagonist of the series.