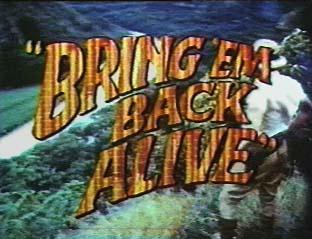 Bring 'Em Back Alive was a CBS adventure television series starring Bruce Boxleitner, Cindy Morgan and Ron O Neal. Boxleitner plays the pith-helmeted Great White Hunter Frank Buck, who here (unlike the real Frank Buck on whose life this series was very loosely based) works out of the Raffles Hotel bar in Singapore during the 1930s fighting all kinds of bad guys in pre-war Malaya.

Bring 'Em Back Alive ran for 17 episodes in 1982-83. Even though it was just a short-lived adventure series, it had fairly complicated plots and even the bad guys got some Character Development.