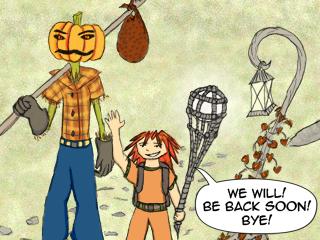 is a collection of five Webcomic Fairy Tales by Leanne Opaskar, currently in progress. Saijiki is Japanese for dictionary of season words in haiku. There are five seasons therein, so there are five stories in the series: Autumnside, Winterside, New Year, Springside, and Summerside.

(ended in Spring of 2009) follows the story of Mala, a human girl, and Jack Bales, an animated scarecrow, who find a strange glowing ball. They set out to discover what it is, but encounter a number of difficulties, including a big bad wolf, an angry race of golems, and a rotten pumpkin.

began in April of 2009. Mala's father returns home after a storm at sea, and the pumpkin people suffer from severe snowstorms. Mala becomes an apprentice to the witch Baba Yaga to investigate the reason for the bad weather.

(began in March 2010) picks up where Winterside left off, with Mala separated from everyone she knows and trying to save a far-off, Japanese-style village from a hungry monster and an oppressive governor.

began in November of 2010, and is currently underway. Summerside will follow upon its completion.