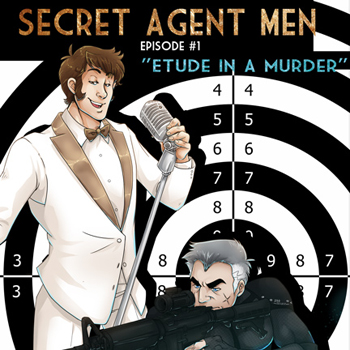 Agents 300 and 250 doing their thing
Advertisement:

Secret Agent Men is an action-y spy-genre parody webcomic centered on the Agents of Niels & Gang.

The comic begins with Agent 250 fighting a transfer to a noncombat department within the Agency. Despite his assertions that he is still Made of Iron, his boss at Section S recognizes that 250's body is beginning to fail him and guilts the agent into giving the transfer a chance. Upon arriving at Section M, 250 is partnered with Agent 300, a smug manipulator. Despite his instant distrust of 300, 250 grudgingly accepts their first mission and... that's about as far as the comic's gotten.

Although one of the comic's stated goals is to fit with the canon of Niels & Gang, the apparent re-imagining of the Agents' first meeting makes it clear that the authors are taking a Broad Strokes approach.

The comic updates on Tuesdays and Fridays both at its website