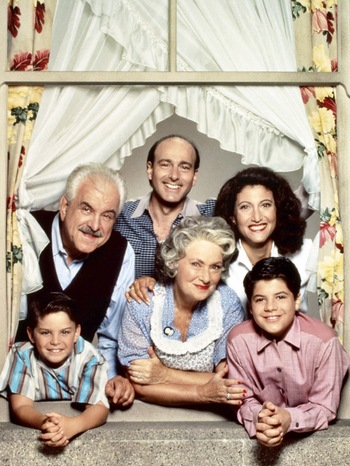 Brooklyn Bridge was an American comedy-drama series that aired for two seasons (1991–93) on CBS, about a Jewish family living in Brooklyn in the middle 1950s. It's loosely based on the life of series creator Gary David Goldberg, who produced this show after a long run as executive producer of the popular sitcom Family Ties.

The main character is 14-year-old Alan Silver (Danny Gerard), whose life revolves around his family, the synagogue, and the Brooklyn Dodgers. His immigrant grandparents Jules (Louis Zorich) and Sophie (Marion Ross) live in the same brownstone as Alan, his brother Nate (Matthew Louis Siegel), and their parents George (Peter Friedman) and Phyllis (Amy Aquino). Alan's life is further complicated by his relationship with his first girlfriend Katie Monahan (Jenny Lewis), a red-haired Irish Catholic girl. Alan cares for her but is certain his parents wouldn't approve.