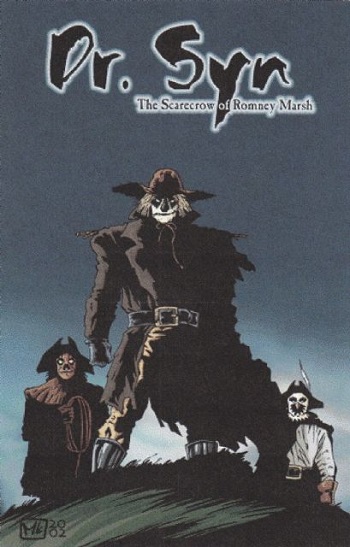 Doctor Syn — or, to use his full title, the Reverend Doctor Christopher Syn, DD note  Doctor of Divinity — is the protagonist of a series of historical novels by British writer and actor Russell Thorndike, published between 1915 and 1944 but set in the 18th century (from 1754 to c. 1794). Some of the stories have been adapted to other media.
Advertisement:

For most of the series, Doctor Syn is the mild-mannered and seemingly respectable vicar of Dymchurch, a coastal village on Romney Marsh in the county of Kent, England. However, he is actually a swashbuckling figure with a wide range of skills who leads a triple life as "The Scarecrow", the leader of a local gang of smugglers, and as "Captain Clegg", a once-notorious pirate.

Originally a distinguished theological scholar at Oxford University, he left the academic life when his wife Imogene eloped with another man. Syn chased them to the Americas, where through a series of incidents, he twice ended up in charge of pirate ships, adopting the "Captain Clegg" identity on the second occasion. He proves to be a peerless swordsman and navigator, with the charisma, ruthlessness and leadership skills to control a cut-throat pirate crew. His sidekick, the loyal carpenter Mipps, is even more ruthless, twice blowing up ships full of pirates to stop them from pursuing Syn and himself when they seek to quit piracy.

Once the pirate life gets too risky even for "Clegg", Syn returns to England and visits an old friend, Sir Anthony Cobtree, the squire of Dymchurch. Fortuitously, the local vicar has just died. Taking over the job, Syn tries to settle down — but on discovering that his parishioners need rescuing from trouble with the law caused by their smuggling activities, he creates the "Scarecrow" identity, takes over the smuggler gang and rides out to various nocturnal adventures. This continues through several novels, during which he outwits various officers who are sent to Romney Marsh to stop him. Eventually, though, his past catches up with him once too often, and Syn is killed by an old enemy at the end of his last adventure.

A little confusingly, the first book to be published actually comes last in the story's chronological sequence, as it brings Syn's story to a climax with his death. The other books are therefore all prequels to that. In order of publication, the novels are:

A postscript of sorts is provided by Thorndike's 1927 novel The Slype, which is set in the (then) present day and evidently takes place in the same universe, as one of the sub-plots is driven by the discovery of a journal written by Mipps.

In addition, an expanded version of Doctor Syn Returns was published in the US market as The Scarecrow Rides. In 1960, American author William Buchanan published Christopher Syn, essentially a reworking of The Further Adventures of Doctor Syn with some changes. That in turn became the basis for the 1963 Disney movie (see below) — which was itself followed by a novelization, Doctor Syn, Alias the Scarecrow, written by Vic Crume.

There have been three movies:

Thorndike also wrote a Doctor Syn stage play, in which he himself played the title role when it was first performed in 1922. Audio adaptations of the books, read by Rufus Sewell, were broadcast on BBC radio between 2006 and 2010.

The stories have no connection to the Buster Keaton movie or any Marvel or DC villains called "The Scarecrow", and is definitely not to be confused with a character from The Wonderful Wizard of Oz. It’s just a cool image.