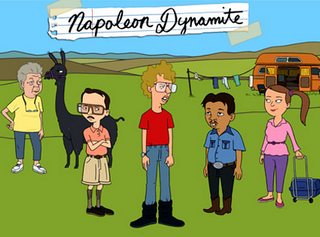 The Animated Adaptation of the 2004 movie Napoleon Dynamite. Announced in 2010 and premiered on FOX in January 15, 2012. The series continues where the film left off, showing the misadventures of Napoleon Dynamite and his oddball family in their sleepy Idaho town.

As this is an animated version, there's a lot more room for exaggeration on the jokes though the show still seeks to retain the charm of the movie. Most of the cast (Don is voiced by Jared Hess) returned to reprise their roles from the film.

Sadly canceled after one season due to low ratings

(and Fox putting its budget money towards more episodes of Bob's Burgers). Amusingly only getting six episodes made, the same amount as fellow movie-turned-animated series, Clerks. Though at the least all of its episodes have aired on its network. All 6 episodes were released to DVD on November 4th, 2014, possibly in honor of the film's 10th anniversary.