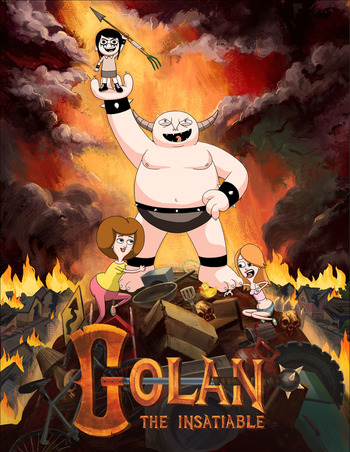 Golan: I am Golan the Insatiable! God-lord terrible of Gkruool! Crusher of wills! IMPREGNATOR OF THE UN-IMPREGNABLE!
Dylan: Do... you wanna' come over?
Golan: Sure! Take me to your castle, little boy!
— first meeting
Advertisement:

Golan the Insatiable is an animated series that premiered on Fox's ADHD block on January 11, 2014, and is based on stories

written by creator Josh Miller that first appeared on the website Something Awful and executive produced by Matt Silverstein and David Jeser, who previously worked on Drawn Together.

It stars 6-year-old goth girl Dylan Beekler and her best friend, the titular demigod warlord from the Gkruool dimension banished to Earth by a rebellion. Golan is always looking for ways to conquer the town of Oak Grove, Minnesota in addition to returning to Gkruool.

After having 6 11-minute episodes on the ADHD block, a full-fledged 6-episode 22-minute series premiered on Fox in May 31st, 2015. You can see the trailer for that here

Golan the Insatiable provides examples of: