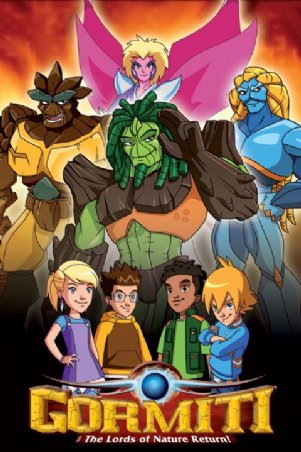 Based on the very popular Italian toy line of Gormiti, Gormiti: The Lords of Nature Return is an episodic series fron Marathon Studio (also noted for Totally Spies!, Martin Mystery and Team Galaxy) narrating the adventures of a group of young children with the duty of keeping the peace in the parallel universe of Gorm, once home to a mighty race of warriors. Not an insignificant task, indeed, since events on Gorm tend to have repercussions on the Earth itself... and the villains of the show, the people of the Volcano, seem to be intent on causing as much of a ruckus as possible! By calling the power of the ancient warriors, siblings Toby and Nick and their friends Lucas and Jessica can transform in Lords of Nature, gifted with the powers of (respectively) Water, Earth, Forest and Air, and fight against the people of the Volcano and their leaders, Orrore Profondo (Deep Horror), Lavion and Magmion. Episodes mostly revolve around the four kids balancing their superhero duty with real life, school and everyday activities... with the interesting variation that, in every mission, one of them (apparently selected at random) has to stay behind, in order to manage his/her friends' powers and give them instructions.

The series was launched in 2009 and lasted for three seasons.

Gormiti: The Lords of Nature Return provides examples of the following tropes: