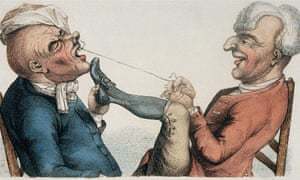 At a few points in time for anyone with a tooth, they'll get a loose tooth or a toothache. Children will begin to grow out their baby teeth. For adults, it could be factors such as age and how they take care of their teeth. This can lead to where The Tooth Hurts such as eating hard food or trying to bite things, among other things.

The practical way to end the ache is a visit to the dentist. But in factors such as that there's no dentist nearby, or that they can't afford to get a checkup, or they're just afraid of dentists, they resort on pulling the tooth out by themselves. A common technique in removing it is tying the tooth with a string to a door knob of an open door and then closing the door. Another method is using pliers (highly not recommended). Results may vary, but should the results end up in failure, it's straight to the dentist anyway.