Jerkass at Your Discretion 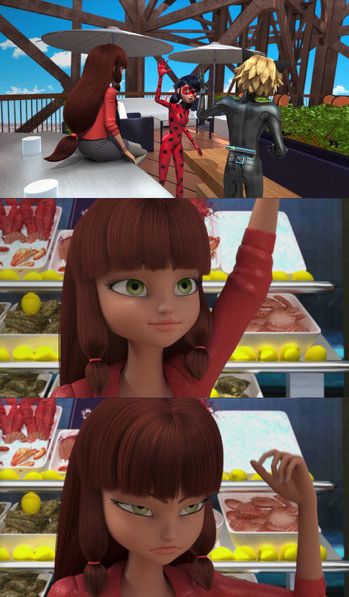 Looks like we'll have to deduct a point from her 100% Adoration Rating after all.
Ah, the age-old trope of someone not being as nice as they first appear to be. There is a smorgasbord of ways for such people to reveal their true colors. Sometimes, however, all it takes is for another character to not be nearby to witness their actions.
Advertisement:

The Jerkass at your Discretion relates is a specific kind of Bitch in Sheep's Clothing that acts nice when certain people are within earshot, but instantly turn sour when they leave. These kinds of characters tend to come off as particularly mean since their desire to hide their true nature implies that they're aware that their behavior would be considered socially unacceptable, but barring one or two exceptions, they simply do not care.

This kind of character tends to be a fairly mundane Villain of the Week, as the "only nice when X character is around" gimmick would get old pretty fast if it isn't resolved. Often a plot involving a Jerkass at your Discretion has the object(s) of their ire trying to warn others of their true nature, only to get brushed off time and again, usually ending with the person from whom the JAYD is trying to hide their true nature finding out one way or another, and subsequently severing ties. In the meantime, expect the JAYD to abuse the tried-and-true Wounded Gazelle Gambit and the False Innocence Trick for all they're worth, doing everything in their power to make the one person aware of their true nature look like they're the bully.

Truth in Television, as this is a textbook tactic of abusers and bullies. Many abusers carefully maintain a positive and well-liked public image as a way of isolating their target, as (theoretically) the target is less likely to be believed if they report the abusive behaviour to others. This is a main reason why survivor advocacy groups have focused so strongly on a message of "believe survivors (when they disclose abuse)" in recent years.

Contrast Jerkass to One, where a character genuinely is nice most of the time, and is only mean to one specific character, Tsundere, where a character acts mean to their love interest in an act of denial when talking to them up front, but secretly shows their true nicer feelings to them when they're usually away, and Yandere, where a character has an infatuation/obsession with someone they claim to love, but will threaten anyone who gets in the way of their desire (the love interest, if needs be). When a character maintains a facade despite being alone, see Undercover When Alone. Related to Two-Faced Aside when someone says one thing in front of someone and then expresses the opposite when out of their earshot, Nice Character, Mean Actor, when they act nice on camera but are mean when they're not rolling, and What You Are in the Dark, when they only show their true colors when they're completely alone.

Compare Morality Pet when a Jerkass acts genuinely nice due to a select person's influence. Compare Traitor Shot, Chaos While They're Not Looking.