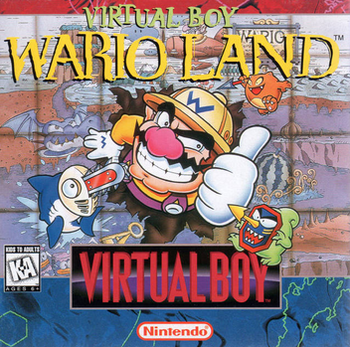 "Wait till they get a load of ME!"

"...it's actually a good game. Damn good. But, only one problem: it's on Virtual Boy."
— The Angry Video Game Nerd, Virtual Boy episode

Virtual Boy Wario Land, subtitled Secret Treasure of the Awazon in Japan, is an entry in the Wario Land series for the Virtual Boy, released in 1995.

Wario is taking a nap during a trip into the Awazon River basin when he spots three masked creatures carrying treasure behind a waterfall. Following them in with the intention of taking the treasure for himself, he ends up falling down a trap door into a vast subterranean labyrinth. Wario must trek through the caverns to take the treasure and get revenge against the Mask-Guys.

The gameplay of Virtual Boy Wario Land is very similar to its immediate predecessor, Wario Land: Super Mario Land 3, lacking the drastic changes to the formula made later in Wario Land II. Wario can be hit once and turned into Small Wario before another hit kills him. Garlic once again provides power-ups similar to the ones from the first game, though they must be combined with new items for more advanced power-ups. Each level also houses one treasure that must be collected for 100% Completion.

Despite the poor reputation of the Virtual Boy console overall, Virtual Boy Wario Land, the last Wario Land game that Gunpei Yokoi worked on before his retirement and death, is frequently cited as one of the few truly good games it had, and it enjoys a high reputation among the few who still know about it. It's also the only game for the console to contain the name "Virtual Boy" in its title.

Not to be confused with Wario Land II, which is technically the third game in the series.