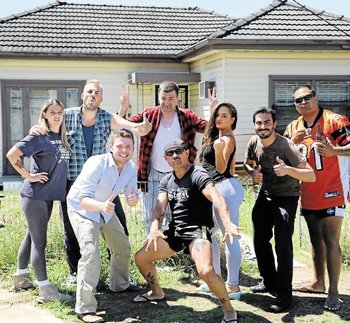 It's a comfy bloody country
'Cos we know what's in our heart
It's beer and boots, not wine and suits
Cricket — not art!
— Keating! The Musical

If there's a character from a Land Down Under, chances are they're the most crass character present. Basic concepts of decorum and "good manners" don't seem to matter to fictional Australians. Just as the continent is depicted as entirely composed of its famous wilderness, the people themselves are portrayed as lacking any semblance of sophisticated culture, consisting mostly of beer-drinking and "knife"-measuring contests.

If the character is heroically-inclined, they'll still be casually politically incorrect, prone to personal antagonism of everyone around them, dropping Cluster F-Bombs and Country Matters. If the character is a villain, expect them to go off the deep end and be a drooling, psychotic brute lacking anything close to resembling a filter.

In Australia itself, "bogan" is the local term for Lower-Class Lout (or people being compared to them). Synonyms include "yob(bo)", "ocker" and "westie" (since the western suburbs of Sydney, Melbourne and Brisbane tend to be lower-class. Inverted in Perth, where the eastern suburbs are the lower-class ones). Examples from media made in other countries tend to have less focus on socioeconomic class, with Australians in general being portrayed as brutish and crass. This is potentially due to Australia's status as being founded originally as a British penal colony, therefore giving rise to the idea that every non-indigenous man, woman and child born there is descended from criminals. The term has also seen use in neighbouring New Zealand, with residents of West Auckland - often referred to as "Westies" - most commonly associated with the stereotype.

Compare Awesome Aussie. Not to be confused with Bulk Bogan.

This should go without saying, but No Real Life Examples, Please!