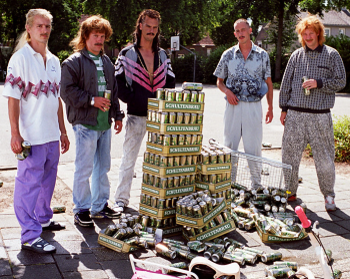 These guys are actually in their mid-20s.
"Lots of middle-class people are running around pretending to be cockney."
— Christopher Eccleston on chavs
Advertisement:

On one end of the social spectrum, we have the Upper-Class Twit proving that money doesn't make good people. But that doesn't mean a lack of money does the same. Coarse, vulgar, ignorant, violent, bigoted, scheming, theft-prone, disproportionately proud of the few non-contemptible traits that they have to their names (most of which are basic requirements for being considered a decent person), disdainful of any desire or attempt to better oneself, and generally greatly at odds with propriety, they are not exemplary members of society by any stretch of the imagination. They will frequently live in a Trashy Trailer Home.

The representatives of this trope sometimes appear alone, but more frequently as gangs. They may be politically motivated (such as the fighting organizations of the communists, fascists, and Nazis), out of spite (such as the skinheads), to rebel against the (perceived) authorities such as the greasers and mods, or just for the kicks. The extremists may be there For the Evulz.

This trope deals with the various varieties of lout, hooligan, and delinquent that appear in various media. While these stereotypes are Truth in Television to some degree, it's debatable whether the stereotype comes from Real Life, or said real-life examples are imitating the stereotype. A typical Lower-Class Lout is a teenager or young adult (with the occasional Enfant Terrible) who embodies the worst stereotypes of the working class (or middle class). One Up to Eleven variant of this type would be the the Brownshirts of the Nazi Party Sturmabteilungen (SA), who were recruited from the lower layers of German working classes and who were used to terrorize the political opponents.

Because of what these stereotypes imply, subversions/aversions/invocations etc. are almost as common as straight examples, with a snobby or elitist character being established as such by having them accuse a sympathetic character of being one of these.

Various parts of the world have their own individual versions. Indeed, it's an interesting fact of criminal-sociology that nearly every society in the world with urban and youth culture has a certain stratum of "difficult" young people, especially men, which draw attention in popular culture. Most of the time they are small fry compared to other villains and become mere Bit-Part Bad Guys, however, depending on the scale of the story, they can conceivably as well be the main antagonists.

Groups often stereotyped as Lower Class Louts with their own article include:

Younger examples are almost always The Bully. Because of the class-based origins of the stereotype, expect the moral of any story they appear in to lean towards Eat the Rich or Kill the Poor. Contrast the Upper-Class Twit, The Upper Crass, and Aristocrats Are Evil (for when the rich are vilified) and Working-Class Hero. Nouveau Riche often overlaps with this when their financial situation changes for the better but their behavior doesn't. See also: Football Hooligans, Delinquents, Loser Protagonist, Slobs Versus Snobs.