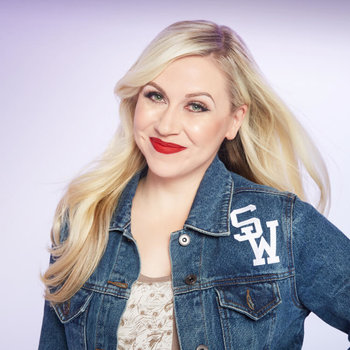 I'm a Jedi Knight - or soon will be.
"So, Dave comes home after auditioning all these people and says 'I think we found her'. 'Well, what’s she like?' 'Well, first of all, she’s possibly the most genuine, kindest person I’ve ever talked to'. And he wanted to bring that to Ahsoka’s character. 'And also - she’s really snippy'"
— Anne Convery
Advertisement:

Maria Ashley Eckstein (born Maria Ashley Drane, September 22, 1981) is an American actress. She is probably most famous for her role in the Star Wars franchise as Ahsoka Tano. She is also notable for founding "Her Universe", a merchandise line for female fans of Star Wars and other "geek" franchises.

Born in Louisville, Kentucky, and raised in Orlando, Florida, Eckstein began her career as a cast member for Walt Disney World's Disney-MGM Studios (today Disney's Hollywood Studios). Her first TV appearance was when she was a contestant on Nickelodeon GUTS in 1994. She married baseball player David Eckstein in 2005 and founded the women's apparel store "Her Universe" in 2010, which was the same year that David retired from baseball.

Ashley Eckstein and her works provide examples of: