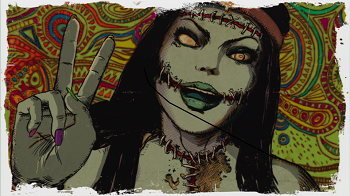 "This is the end, Beautiful friend..."
"Now, open your heart, and let my music guide you... into the world of everlasting peace... and rot. And Hell!"
— Mariska, The Queen of Psychedelia, Lollipop Chainsaw
Advertisement:

The general interpretation of the hippie movement often borrows heavily from various sources from the Flower Power movement and John Lennon. Pacifism, free love, multiculturalism, and tie dye in the face of authoritarian conformity. "Make Love, Not War". What pop culture tends to forget was that the hippies were a counterculture movement. There was a lot of activism going on, and not all of it was sitars and sit-ins. People got hurt, people died, and everyone with a political incentive against them would latch onto these "indiscretions" and milk them for all they were worth. Pop culture would take the negative stereotypes that were spread and would demonize hippies, creating various evil examples in fiction.

Horror Hippies often spawn from communes, many of their bad ideas swimming in a petri-dish of brain-cooking narcotics until they turn from quaint little clubs to horrifying cults, all under the service of a charismatic sociopath that would lead them to revolution. This "revolution" usually involves kidnapping innocent people, rape, murder, torture, and Insane Troll Logic brought to boil by a Warhol Factory's worth of mind-bending drugs.

, the various characters being Expies and Stock Parodies of them and the event that made them so infamous.

Mariska is one of the Dark Purveyors, a group of powerful zombies from Rotten World out to cause the apocalypse. Mariska in particular is a hippie zombie with the power of illusions.

Mariska is one of the Dark Purveyors, a group of powerful zombies from Rotten World out to cause the apocalypse. Mariska in particular is a hippie zombie with the power of illusions.