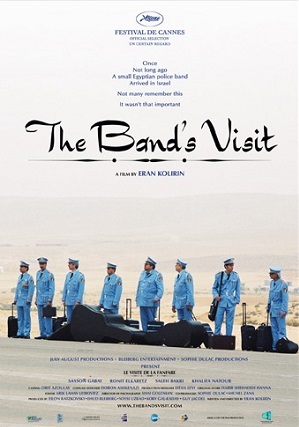 Once, not long ago, a small Egyptian police band arrived in Israel. Not many remember this. It wasn't that important.
Advertisement:

Bikur Ha-Tizmoret, distributed in English speaking countries as The Band's Visit, is a 2007 Israeli film directed by Eran Kolirin and starring Saleh Bakri, Ronit Elkabetz, Sasson Gabai and Uri Gavriel. It tells the story of the Alexandria Ceremonial Police Orchestra, a band of eight Egyptian classical musicians who travel to Israel to perform in the Arab Cultural Center in Petah Tiqva, but take the wrong bus because of a tricky language barrier and wind up in a small town named Bet Hatikva, in the middle of the desert. They then discover that there will be no further buses there for the rest of the day, forcing them to spend the night there.

What follows is a gently comedic story of clashing cultures and awkwardness, as the band and the locals befriend one another.

The film was submitted to the 80th Academy Awards but was declared ineligible due to the frequent use of the English language (foreign films submitted to the Awards must be performed in their native language). However, it won eight Ophir Awards from the Israeli Film Academy. A Screen-to-Stage Adaptation hit Broadway in 2018 and swept the Tonys.