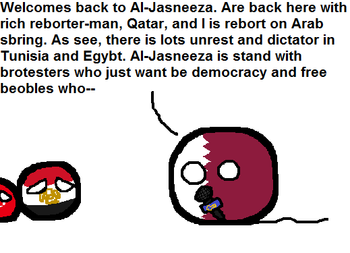 "Blease do rebort thing and show injustice that is habben!"
Arabic phonology has several distinguishing features to it, most notably:
Advertisement:

If you want to learn more, The Other Wiki has more on Arabic phonology.

These features are often exploited for the sake of comedy, as a Shibboleth, or for any other reason, and often appear in Funetik Aksent. Due to historic reasons, this appears nowadays quite often in, say, Israeli worksnote Many poor immigrants from Arabic-speaking areas will pronounce words with an Arabic twist (see above) while the more well-to-do European don't; due to their poverty, cultural differences, and their association with Arabs, these Arabic accents are very stigmatized in Israel, even among these immigrants’ children and grandchildren, but not so much in Western ones.

While this is certainly Truth in Television to some extent, this trope is averted in Real Life by some Arabic speakers who do pronounce both /p/ and /v/ in loanwords, either consistently or interchangeably with /b/ and /f/, and represent these phonemes orthographically, using the Persian letter ﭖ for /p/ and the adapted letter ڤ for /v/ instead of the Arabic ب for /b/ and ف for /f/. Enforced by purists who claim that these letters are ‘not Arabic’ and played straight when loanwords become naturalized in the language. Similarly, the /g/ phoneme is often transcribed using other ‘adapted’ letters, depending on the dialect. However, this varies as some Arabic dialects have the phoneme natively (Egyptian being the most for it). Persians tend to have a softer accent than Arabs.

Note that this trope often does not appear as a feature of Qurac, probably because people who are familiar with this are usually acquainted enough with Arabic culture to avoid the Qurac portrayal in the first place.

See Arabic Language for more on Arabic in general.

Due of its nature, this trope is mostly exclusive from Western, African and Middle-Eastern countries, the latter especially prominent in Israeli media. Countries outside those regions (like Japan, South Korea, China, etc) have their own ways to stereotype Arabic language or sometimes they avoid this trope altogether.

NOTE: A character merely having a thick Arabic accent is Not an Example. These features have to be commented on or to appear as Funetik Aksent for the example to qualify.