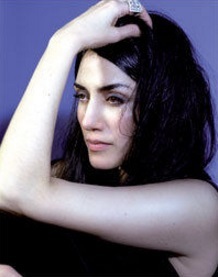 Ronit Elkabetz (Hebrew: רונית אלקבץ‎, Arabic: رونيت القبص, November 27, 1964 – April 19, 2016) was an Israeli actress, screenwriter and director of Moroccan descent. She worked in both Israeli and French cinema (she was fluent in French) and won three Ophir Awards, with a total of seven nominations over her career.

She specialized in the roles of women who are confronted to various psychological, emotional and social troubles in contemporary Israeli society. Her younger brother Shlomi became a director whom she worked with on a film trilogy in which she starred as the main character, Viviane Amsalem, a woman who struggles to overcome her difficulties (couple problems and religious pressure, mostly) and obtain divorce following her Arranged Marriage with a man she doesn't love.