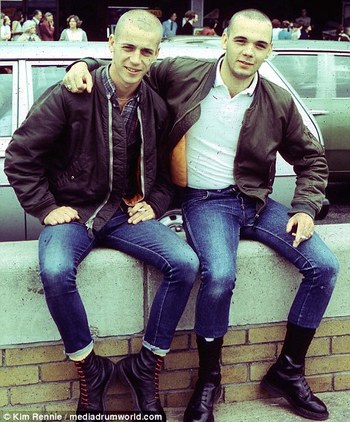 How's Geraldo's nose? Still broken?
"Young skinhead, they call you hooligan
Just because you don't make any sense to them
You're a hardworking man who's paid his dues
But they still call you racist on the evening news"
— Dropkick Murphys, "Never Alone"
Advertisement:

Ah, skinheads. Right up there next to feminists when it comes to subcultures people are most likely to have the wrong ideas about. Quick answer: yes, there are Nazis among them, but they're not all Nazis, and a good number of them are likely to strongly disagree with such an assertion.note It's also worth pointing out that the skinhead look has fallen out of fashion with white supremacists and neo-Nazis in recent years, done partly to avoid the immediate association with white supremacy as a strategic decision to blend into and infiltrate mainstream society, but also as a natural consequence of many switching over to the undercut hairstyle now called "Hitler Youth" that was popular with German men during Hitler's rule of Germany. For example, the vast majority of the marchers in the infamous 2017 Charlottesville alt-right rally were not skinheads.

Skinheads first truly emerged in British culture in the '60s, following the long post-war economic boom. They were working class youth who made use of their money by buying clothes that reflected their lifestyles (straight-leg jeans, work boots, braces [suspenders], and occasionally suits) and going to dance halls to enjoy styles such as ska and rocksteady. They were technically mods (more famously known for their upper-class, more refined image), but broke off from the other mods around the late '50s and became their own subculture, eventually becoming known as skinheads around the late '60s.

Now, as for the racism... in the early '60s, there were individual attacks launched by skins on Pakistani and other South Asian immigrant families. It wasn't until the '70s, with the rise of the National Front, that a number of skinheads organized and adopted racist dogma. At the same time, though, there were still skinheads who joined up with other movements opposed to the National Front, such as Rock Against Racism, or would found their own, such as the SHARPs (Skinheads Against Racial Prejudice). It's just that, around that time, there were neo-Nazi groups that operated openly and were made up mostly of skinheads, and the media put two and two together and got headlines. Ironically, many early skinheads were heavily influenced by rudeboys and/or were actually British-Caribbean, making the association of skinhead culture with white supremacist/National Socialist sympathies all the more unfortunate.

These days, the skinhead subculture isn't as large as it was, but it still pervades among working class Brits as well as working class Americans and Australians. It's just that the stigma is hard to avoid. It's a little bit easier in Britain, where while skinheads still bear racist associations, there are also vocal and active skinhead groups that speak out against racism, which kind of blunts the stigma (hell, skinheads are something of a fetish amongst European gay men). America kind of developed the skinhead subculture "second hand," however while skins did make their way over from the first days on, and while the SHARPs came together in New York City, skinheads aren't really well understood as a subculture outside of the punk/hardcore/street subcultures assembly. As a result, "skinhead" and "Nazi" are practically synonymous in American media. This is possibly because, in the United States, there has yet to be a single skinhead movement or subculture which has received any media attention at all for being anything other than a pack of neo-Nazi scumbags. SHARP might have got its start in New York City, but by this point it may as well not exist in the US. Nowadays, "bonehead", or less commonly, "hammerskin" is the proper nomenclature for white supremacist/National Socialist skins, and it's often not hard to tell the two apart based on how long their hair is (skinheads usually buzz theirs, boneheads usually shave it off completely) or - of all things - what color their boot laces are (racist skinheads prefer white or red laces, almost always laced in a straight bar fashion).

The original movement still exists and has spread to cities on all continents, but because of the Aryans, they don't refer to themselves as 'skinheads' anymore. They are the longest-lived subculture currently existing, probably due to remaining under the mainstream radar, which they're content to continue doing. The Aryans simply co-opted a few costume elements, and care less about preserving the movement than their own high profile.

As has been outlined extensively, skins dance all over the political spectrum, from neo-Nazi skins to anti-fascist skins, who are likely to try and club the shit out of each other if they were to meet in a dark alley. There are also traditionalist skins, who try to avoid politics all together and focus on the working class pride the subculture originally was supposed to embody. Skinhead fashion is mostly uniform among males: flight jackets, Fred Perry and Ben Sherman shirts, suspenders (braces), tight "bleachers" (bleached jeans), and work or combat boots (usually Doc Martens, though many skinheads have switched over to other brands after production for Doc Martens moved out of Britain to countries known for sweatshop labour).

Examples of portrayals of skinheads: