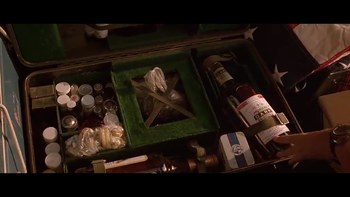 Name your poison.
"We had two bags of grass, seventy-five pellets of mescaline, five sheets of high powered blotter acid, a salt shaker half-full of cocaine, a whole galaxy of multicolored uppers, downers, screamers, laughers... also a quart of tequila, a quart of rum, a case of beer, a pint of raw ether and two dozen amyls. Not that we needed all that for the trip, but once you get locked into a serious drug collection, the tendency is to push it as far as you can."
— Raoul Duke, Fear and Loathing in Las Vegas
Advertisement:

While most users usually have a drug of choice, in fiction one sometimes encounters a drug user who is completely undiscriminating in their choice of intoxicant. They are so keen (or desperate) to get high, that they will take any substance that offers them a chance to do so. Often Played for Laughs if the substance they are snorting (or smoking, ingesting, imbibing, or injecting) is not a narcotic at all.

A common variant is a drunkard who will drink anything remotely alcoholic to get drunk, even those that aren't meant to be potable.

May lead to I Can't Believe It's Not Heroin!, G-Rated Drug, Drunk on Milk.