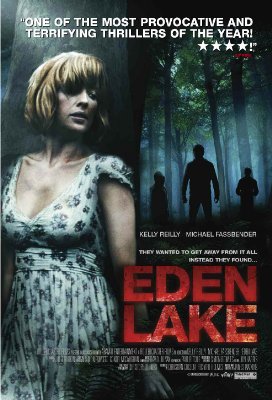 Nursery teacher Jenny (Reilly) and her boyfriend Steve (Fassbender) go on a camping holiday to the idyllic Eden Lake, soon due to be overtaken by a gated community, where Steve plans on proposing to Jenny.

After they arrive and attempt to relax, a local gang of chavs (lower-class British youths), led by a particularly unhinged boy named Brett, begin to infringe upon their time together and continuously ignore Steve's requests for peace.

After one chance encounter, the gang's mischievous rowdiness turns to horrific rage, unleashing a whole new side of their danger that throws the couple's vacation into an immediate downward spiral.

What was once the setting for a beautiful getaway turns into the grounds of a fight for survival as the couple are dragged into an increasingly brutal cat-and-mouse game, and must do whatever it takes to get out of the woods.