Army of Thieves and Whores 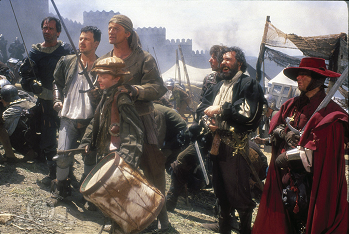 They're ragtag, but an army all the same!
"The French system of conscription brings together a fair sample of all classes; ours is composed of the scum of the earth — the mere scum of the earth."
— The Duke of Wellington on the British Army
Advertisement:

An army of thieves and whores is a military force made up of the lowliest dregs and losers of society. There's slaves, beggars, prostitutes (and their kids), robbers, outcasts, renegades, carnies, backstabbers, lawyers, heretics, and in general everybody you wouldn't expect to see in a proper army.

There is a practicality in using them as a military force: criminals are more likely to be well-trained and experienced in the art of taking others' lives. Besides your more independent serial killers and professional killers, gang members may even already be familiar with organized warfare of the underground urban variety. Therefore, they are more efficient to use as killing machines rather than wasting time subjecting a conscript to psychological torture which will result in PTSD-induced suicide. The major problem is how to keep your pets controlled so that they won't rebel. However, in fiction and Role-Playing Games, these armies of thieves and whores are often are portrayed as the heroes, because Underdogs Never Lose, or because the concept of ragtag underdogs fighting against a dystopia is very appealing for RPG scenarios. These positive portrayals will likely be put in contrast with the aforementioned dystopia which will be well-ordered and disciplined yet more unsympathetic and ruthless than our downtrodden misfits. There may also be a theme of uniting the downtrodden to stand against their oppressors.

The French Foreign Legion is often characterized this way, both in fiction and real life.

Less optimistic portrayals will feature "penal battalions" where criminals and the dregs of society such as thieves and whores will be conscripted into the military and sent out as cannon fodder, or at least be Trading Bars for Stripes. See also Boxed Crook.

In Real Life, this has often been the makeup of armies throughout history. Military life in the ranks was just too distasteful for someone to volunteer for it that didn't find civilian life just as hard unless he was motivated by ideology. When there was no ideological reason and no Barbarian Tribe nearby to recruit from, this is what you are going to end up with. The pay was simply not good enough to attract respectable people unless they were from nobility; which sometimes had ancestors who were part of one of these. On the other hand, assembling them into a properly trained army was a rather hard task not only for reasons of literacy or discipline but also due to the spread of chronic disease in a population with poor or no access to medical care and proper feeding and living conditions. A recruit from the poorest class in the Victorian Era could be expected to have either latent tuberculosis, syphilis, gonorrhea, bone diseases, or, worse, all of them together, and in crowded military camps germs are easily spread. (The ordinary peasant recruit of the State army was not much healthier either. The British Army Medical Corps found out in 1899

the majority of recruits were unfit for combat, even by the low standards of the time.)

Contrast the Carnival of Killers. Not related to the movie Army of Thieves.