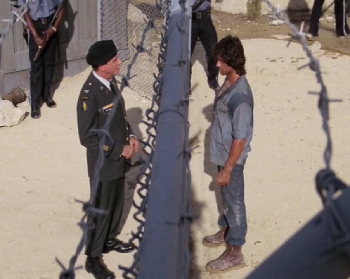 "It's your choice. Keep your uniform, or trade it for mine."
"When Pete was only in the seventh grade, he stabbed a cop.
He's real R.A. material and he was glad to swap
His switchblade and his old zip gun
For a bayonet and a new M-1!"
— Tom Lehrer, "It Makes A Fellow Proud To Be A Soldier", An Evening Wasted with Tom Lehrer
Advertisement:

A character is currently locked up in prison either serving out a considerable sentence, awaiting execution, or is on trial facing the former two. The judge or some other government official offers them a choice: they can suffer their punishment or join up with the military.

For this trope to apply, the character in question must already be in legal custody and the only option for freedom/absolution is military service. Unlike the Boxed Crook, they have to serve at least a full tour of duty to earn their pardon rather than go on a single Suicide Mission.

Unlike Recruiting the Criminal, they're recruiting a caught rather than free criminal. For extra empathy points, the "criminal" is an innocent who wants to Clear My Name... and the government is perfectly willing to abuse that desperation.

May overlap with Army of Thieves and Whores and Legion of Lost Souls. Also a subtrope of Consequence Combo, as you either fight for The Government and clear your record, or do time. The inverse is From Camouflage to Criminal, where someone turns to a life of crime after leaving the military.

Not to be confused with the rare but perfectly acceptable practice of American junior officers - who wear gold or silver bars - resigning their commissions and enlisting.