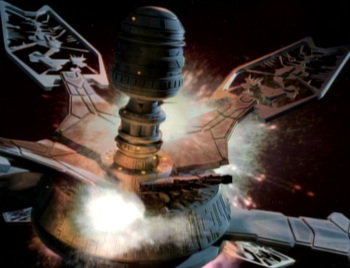 Well, then. We might be out here a while.
"Captain, if these sensors are working, we're over seventy thousand light years from where we were. We're on the other side of the galaxy."
Advertisement:

The newly-commissioned Federation starship Voyager is assigned to locate a missing Maquis raider, only for both ships to be snatched into the Delta Quadrant by a powerful alien called The Caretaker. The Caretaker is dying, and is searching the galaxy for compatible genetic material to create offspring to carry on his life's work: the protection of the Ocampa. When the Caretaker dies before accomplishing his goal, Captain Janeway is forced to destroy the Caretaker Array to stop it falling under the control of a hostile alien species who would destroy the Ocampa, leaving Voyager stranded on the far side of the galaxy.