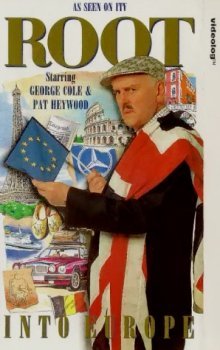 Root into Europe was a 1992 tragicomic British mini-series produced by ITV. Based on The Henry Root Letters by William Donaldson it featured a British couple, Henry Root (George Cole) and his wife Muriel (Pat Heywood), making a trip throughout Continental Europe. Mr. Root is an Eurosceptic British man who doesn't like the idea of United Kingdom being part of The European Union and tries to impose British values on other countries. This, of course, leads to hilarious situations as he often comes across as a twit himself, especially because his stereotypical ideas are often proven wrong. Throughout the series the couple visits France, Spain, Italy, Germany, The Netherlands and Belgium.

Only five episodes were made and despite some good reviews, even in the rest of Europe, the series has only seen a VHS release so far, but has not been made available on DVD and thus faded away in obscurity somewhat. So Keep Circulating the Tapes.

Root into Europe provides examples of: