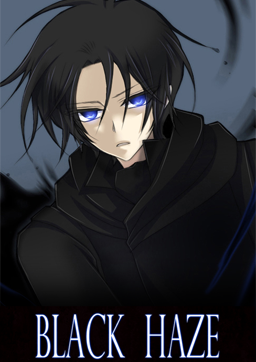 Rood Chrishi has a secret –- he's actually the Black Magician Blow, one of the youngest but strongest magicians in the world. In spite of that, lately, his master only sends him out on trivial missions like running errands and orchestrating petty revenge schemes for clients. Naturally, Rood has come to feel quite dissatisfied with the direction his fledgling career has taken.

One day, while fleeing from a low-level magician whose cronies he beat up in defense, Rood encounters the powerful Duchess Dayner Artian, who, impressed with his abilities, requests his help. Her second son, Lidusis, hasn't been fitting in well at school, to put it mildly, and she'd like Rood to help him out. To do so, Rood must go undercover as a student at famed school of magic Helios Academy and find out just why everyone calls the son of an esteemed duke "the Monster." Of course, Rood soon comes to realize that there's a lot more going on at this exclusive school than meets the eye...

Black Haze (Korean: 블랙 헤이즈) is a fantasy-comedy webtoon by Dydyddl 7 (or Yong Yong) that blends humor with drama and action with school life in a surprisingly balanced equation. It takes itself seriously — but just barely. Formerly a Naver Best Challenge Comic, it was picked up by TTale, where it was serialized until chapter 102. It was hosted on FoxToon

until January 27th, 2018, when it was taken down, and is presently on indefinite hiatus.

The series has a wiki here.