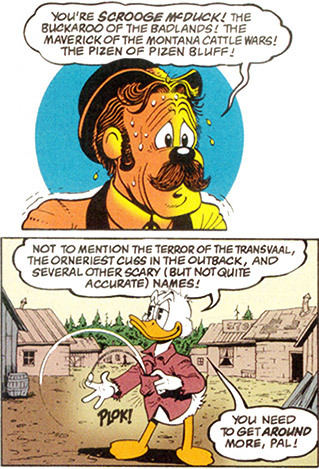 For reference purposes, the fellow getting spooked by the richest-duck-in-the-world-to-be is Wyatt Earp.
"Everybody who is anybody in this business strives to be legendary, and we are legendary."
— Malia Hosaka, summing up her newly expanded Power Stable.
Advertisement:

Some people become famous. They're well known, even if not very much is known about them. The Living Legend attained fame during his life (as opposed to posthumously).

The Living Legend is respected for these things. Wherever he goes, people recognize him and buy him drinks. They ask him if he really did all those things. They want to know what it was like being where he was. They ask him to demonstrate his prowess.

This is a person whose reputation makes him larger than life even in his own time. The Living Legend can run the gamut from hero to villain, truth to lie, professional to amateur. The point isn't whether his reputation is deserved, but that he has it.

For those who remember the legend before he was and still don't see him as one, see No Hero to His Valet. If he deliberately plays up a false reputation, he's Miles Gloriosus. If someone else is doing this for him, he's the Fake Ultimate Hero. If his reputation inspires fear rather than adulation, he may very well be The Dreaded.

If his reputation is based on having just been in the right place at the right time, he's the Accidental Hero. If he's a random guy thrown into it, he might be an Action Survivor.

Sometimes the Living Legend's reputation is non-specific and he's Shrouded in Myth. Sometimes it's very specific and everyone calls him "The Butcher of X".

When a character's deeds are remembered in subsequent works, he's Legendary in the Sequel.

When he shows up to ruin a protagonist's day, The Ace will often be hailed as a Living Legend by his legion of squeeing fans.