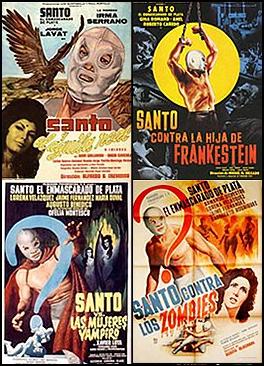 Who the hell is this guy? Why the frick is this Santo dude picking a fight with every mythological beast, Ancient Conspiracy, and cult icon within arm's reach? Is he recognized as a saint by the Vatican? And is The Blue Demon friend ... OR FOE?!?!?

The term "Larger Than Life" gets thrown around a lot these days, but in the case of Lucha Libre legend El Santo, it is entirely appropriate. At 5'9" he was of only average height, but Santo's reputation puts him on par with pulp legends many times his size, like King Kong, Godzilla, or Mothra. In fact, those beasts, and many more, were probably next on the wrestler's hit list before his passing in 1984.

Born Rodolfo Guzman Huerta (September 23, 1917 – February 5, 1984), he started out normal, or whatever passed for normal in the hard-knock world of Mexican professional wrestling in the 1940s. After starting out as rudo, he gained popularity, turned into técnico, and by the 50s was basically the biggest name in Lucha Libre. It is at about this point that El Santo evolves from mere Wrestling Legend to a cult figure and folk hero.

Keen to cash in on wrestling's popularity, a comic book was published starring Mr. El Santo. As expected for a comic book, it depicted Santo as a Batman-esque crime fighter, and set him up against a trademark-unfriendly Rogues Gallery of monsters and ne'er-do-wells plucked from around the world. What made Santo different from conventional superheroes is that he was actually real, and literally did many of the exact things shown in the comics, i.e. wrestling, wearing gaudy costumes, and battling "evil" wrestlers on a regular basis.

Stand back and think about this for a second. How insanely awesome would it be if Superman, Batman, and Wolverine freed themselves from the page, and started flying around/brooding around/slicing around your neighborhood? Now imagine you're a six year old kid in Mexico City in 1954, and your favorite thing in the world is El Santo Comics. It doesn't take long to discover that Santo is a real person. But unlike when you find out that your daddy is Santa Claus, it turns out that Santo is actually buff, actually fights people, and has both an actual superhero costume and a semi-secret identity? All that crazy stuff El Santo does in the comics, like choking out the Loch Ness Monster and hiding out in a secret moonbase, suddenly becomes an order of magnitude more believable. Even the brighter kids can't outright dismiss the more mundane stories, like Santo foiling bank robberies or inventing gadgets, perhaps even fighting sharks. For the youngsters of the 50s and 60s, El Santo was an Actual Real Life Superhero, regardless of his technical lack of superpowers.

And then there were the movies. Yes, the dozens of El Santo films, where not even the ultimate enemy of rock-bottom production values could contain the sky-high ambitions of Mexico's most famous crimefighter. Over the course of a film career that lasted over two decades, Santo battled everyone from Martians to an entire extended family of Frankenstein monsters. To modern eyes, these quality of these flicks fall squarely into So Bad, It's Good territory, but upon release, the films catapulted Santo to even greater fame and renown. They also made El Santo an international superstar, though more in Latin America and Europe than in North America, where only four of his films were released in English dubs.

The movies also featured Santo's Worthy Opponent Blue Demon, who in true wrestling fashion would switch from ally to enemy and back on a fairly regular basis. Take a gander at The Other Wiki for the full filmography.

Legends are invincible, but despite rumors to the contrary, Santo was indeed human. After nearly 50 years in the ring, El Santo's age finally caught up to him. Following a farewell tour against a who's who of Lucha Libre, the masked man retired in 1982 at the ripe old age of 64. In January 1984 on a nationally televised talk show, Santo unmasked for the first and only time in public, shocking his legions of adoring fans. It is widely hypothesized that the luchador knew his time on Earth was about to run out, because a little more than a week after the television incident, Heaven got its Saint back. El Santo was buried wearing his iconic silver mask. Nowadays, his son competes in a similar mask, going by the name "El Hijo del Santo"—The Son of The Saint, as well as El Hijo's own son, El Santo Jr. Another grandson, Hijo Del Santo's nephew, toured the Mexican circuit as Axxel, following a legal dispute over whether he could go by "El Nieto del Santo," Santo Jr's original name. The courts later ruled in his favor, and he has gone by Nieto del Santo ever since.

Throughout his entire career, Santo was also a hero to the people, giving back to the community through charity and giving public support to many causes in favor of Mexico's poor. This made his wrestling name take on a more literal meaning to many of his fans, and some people in Mexico actually hold the belief that Santo is the saint that the Vatican will never canonize, but a saint just the same.

In the last year of his life, he gave a newspaper interview discussing his career. He admitted he was not the best in-ring technician, nor the most charismatic, was only drawn to the "masked man" gimmick due to the fact that it was popularized by others, and that he had followed others in trying to make his name in the movies. He didn't know, for the life of him, how he ended up as the most popular wrestler in all of Mexico. Perhaps that was the reason why.

These days, few people actually believe that El Santo applied a scorpion leg lock to Count Dracula, but no one can prove he didn't, and so the legend of the Wrestling Saint cannot be destroyed. From Guadalajara to Gunma Prefecture, his story lives on.