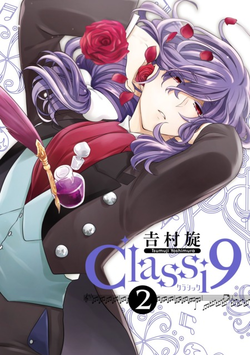 Classi9 note クラシック; ku is one way to say 9 in Japanese. No, it's not "Classy-nine" is a manga by Yoshimura Tsumuji, which was serialized in Gangan Online from April 2015 to April 2017 and compiled into five volumes.

Taki Ren goes to Vienna to study music, but she has to take the identity of Taki Rentarou in order to stay in Melite Music School, as it is an all-boys school. Therefore, she is put in Class S- with other “quirky”, but brilliant composers, among them Wolfgang Amadeus Mozart, the only one to know her secret.