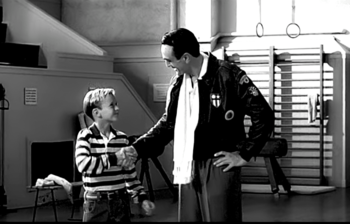 "How'd you like to take a break from that fine lead-based paint and learn about dodgeball?"
Jimmy: Mr. McClure?
Troy McClure: Oh! Hello Bobby.
Jimmy: Jimmy. I'm curious as to how meat gets from the ranch to my stomach.
— The Simpsons, "Lisa the Vegetarian"
Advertisement:

Little Jimmy is a young character without any distinguishable traits other than complete unawareness related to the subject at hand. He's typically young, white and freckled. His only job is to represent the young and unaware viewers of the film who know nothing about common sense and would very well get into a car with a stranger offering candy unless some superhero or other fictional character comes along and tells them that it's wrong.

Most likely found in educational films, commercials, and public service announcements (or parodies thereof), but similar youngsters sometimes appear in dramatic works, when a wise old Mr. Exposition needs to narrate a detailed explanation of the setting or backstory to someone who knows very little about the same.

Compare Constantly Curious and Curious as a Monkey, both of whom have an insatiable curiosity and are quite willing to indulge it on their own. See also Naïve Newcomer, The Watson, Too Incompetent to Operate a Blanket, Easy Evangelism.