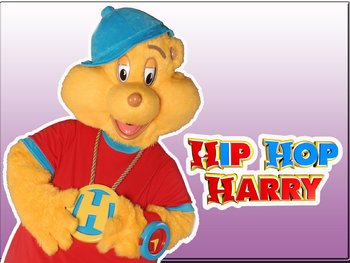 Hip Hop Harry (2006-08) is an American children's TV show created by Claude Brooks. It takes place in an after-school community center known as the Hip Hop Center. The center is ran by an anthrophomorphic yellow bear, Harry, who teaches several children about how to live healthy, use your imagination, creativity, and friendship through Hip-Hop songs.

Yeah, it's evidently a Totally Radical Barney & Friends. So much so that the actor who plays Harry, David Joyner, also portrayed Barney himself from 1991 to late 2001 (at least, physically for both, as Ali Alimi voices Harry).

The children that who appear on the show (usually in a group of four per episode, but sometimes in a group of five) were Sophina, Savannah, Jay-Jay, Scott, Megan, Davide, Jake, Veronica, Katie, Kelli, Kendra, Colton, William, Elizabeth, Kiana, Tyler, and Hayden. They're backed up by a second group of children referred to in the credits as "background kids".

The show premiered on Discovery Kids in September 2006, and aired on TLC's Ready Set Learn block), and lasted until 2008, with two seasons and 26 half-hour episodes. It continued to air in reruns until the Ready Set Learn block ended on October 8th, 2010, and hasn't been on American TV since.

of the show still actively posts videos daily, not just of the show but more recently videos of Hip Hop Harry today still doing various activities such as challenges and toy reviews.

You can't have a works page without some tropes: