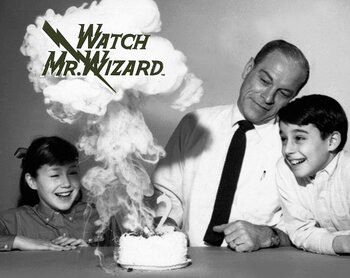 Watch Mr. Wizard was an early attempt at science education through the medium of television. Created by radio personality Don Herbert (who played the titular Mr. Wizard, a science hobbyist), the series focused on teaching basic scientific principles such as magnetism and friction. In any given episode, a boy or girl would enter Mr. Wizard's lab and be shown what was, in effect, a scientific magic trick. This would then lead to a discussion and teaching of the principles connected to the trick — vibrating a spoon with sound waves from an electronic speaker, for instance, led into a discussion of the generation of electricity, and thus vibrations.

Starting in 1951 on NBC, Watch Mr. Wizard proved to have staying power, a combination of Herbert's genial personality and a presentation style that would be copied for over a generation to come: Show, then tell. After moving from Chicago to New York in 1955, the show would continue to run for ten more years before being canceled. In that time, it even won a Peabody Award, and was credited by the National Science Foundation and the American Chemical Society for increasing public interest in science. NBC tried to revive it six years later as Mr. Wizard, moving production to Canada and airing the program on CBC, but the revival lasted only one season.

In 1983, however, Nickelodeon, still in its infancy and starved for new and original programming, revived Mr. Wizard once more, on cable. Mr. Wizard's World was a faster-paced version of the show, and ran until 1989, managing to become the third most popular show on the then-fledgling channel (behind Livewire and You Can't Do That on Television).

Watch Mr. Wizard and its variants contain examples of: