Series / My Brother and Me 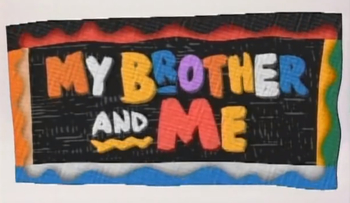 My Brother and Me is a Kid Com that aired for only one season on Nickelodeon from 1994 to 1995. The star is Alfred "Alfie" Parker, the Straight Man older brother, Derek "Dee Dee" Parker, the Annoying Younger Sibling, and their bored sister Melanie. Alfie's best friend is Milton "Goo" Berry, an Ace who often tries to sweet-talk the uninterested Melanie. Their parents, Roger and Jennifer Parker, are your typical sitcom parents.

It is a typical Slice of Life show, with the main conflicts being Alfie and Goo's struggle with Dee Dee and his friends, Goo's unrequited love for Melanie and disdain for her friend Deonne, and the brothers' attempts to keep out of trouble with their parents.

Has nothing to do with My Brother, My Brother and Me.