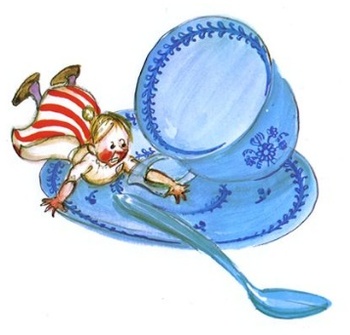 Mrs. Pepperpot ("Teskjekjerringa" in the original Norwegian) is the main character in a series of children's books by Norwegian author, singer and entertainer Alf Prøysen. She's a little old woman who's mostly a completely normal person — except for the fact that she occasionally, and at seemingly random times, shrinks to the size of a pepperpot (in the original Norwegian, she's likened to a teaspoon). Usually this is a great inconvenience and happens just as she has some small job to do — which all of a sudden becomes a humongous task. However, with a lot of courage, resourcefulness, quick thinking, and the curious fact that while shrunken she can talk to animals, she always perseveres. And on a very rare occasion, it so happens that shrinking down to miniature size is exactly what the situation calls for.

Though Mrs. Pepperpot takes her shrinking well, she's not eager to let other adults know about her condition. She has no problem with animals or children knowing, and the majority of her adventures do seem to involve either helping out or being helped by a child or an animal, but she never tells another adult about her shrinking, nor does she let them see her in her shrunken state (unless she's impersonating a doll or something similar). This might simply be because of her husband, Mr. Pepperpot, the only adult who knows about her shrinking and who treats the entire thing as an embarrassment more than anything else; he's certain that he'll become a laughingstock if it ever came up that his wife is occasionally the size of a pepperpot.

The character's first appearance was in 1955, on the Norwegian Children's Hour radio. Since then, she's appeared in several books and radio stories which have been translated into over twenty languages. There was also a Swedish-produced live-action TV series in 1967, a 130-episode-long anime ("Supūn Obasan" or "Auntie Spoon", featuring an episode written and storyboarded by Mamoru Oshii) in 1983, and even an opera in 2011.