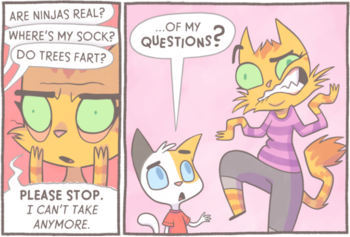 A person, usually young, who is full of questions. (All in total innocence, of course.)

Curiosity Is a Crapshoot even for them, but tends to be good; if nothing else, they have Improbable Infant Survival protecting them.

Not the Mouthy Kid; generally perfectly polite except for their questions, and completely oblivious to the fact they could be considered rude or insensitive.

Often features as The Watson, to make Mr. Exposition a Justified Trope, since the child doesn't actually know what is being Infodumped on them — that's why they're asking the question. But perfectly capable of being just a characterization trope. Also frequently the source of the Armor-Piercing Question — not so much because of insight as being Too Dumb to Fool.

Contrast Curious as a Monkey, which describes someone who believes in discovering how things work by experiment. A Constantly Curious person is a more persistent nuisance but doesn't make trouble on quite so grand a scale. Will often be palmed off with Lies to Children, but this frequently doesn't work as the next thing they do is poke holes in the simplified explanation.

Repeat offenders when it comes to Derailed for Details and Sidetracked by the Analogy.

See also Little Jimmy, who has no characterization except his ignorance.

Note that the final answer is still mostly bullshit, but it's not totally false, it's an attempt at a middle ground, and it provides a comprehensive explanation that positively responds to the child's inquiry.

Thomas is curious about his surroundings in Italy and nearly gets in trouble.

Thomas is curious about his surroundings in Italy and nearly gets in trouble.